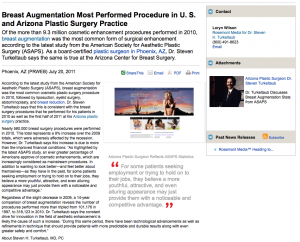 Of the more than 9.3 million cosmetic enhancement procedures performed in 2010, breast augmentation was the most common form of surgical enhancement according to the latest study from the American Society for Aesthetic Plastic Surgery (ASAPS). As a board-certified plastic surgeon in Phoenix, AZ, Dr. Steven Turkeltaub says the same is true at the Arizona Center for Breast Surgery.

According to the latest study from the American Society for Aesthetic Plastic Surgery (ASAPS), breast augmentation was the most common cosmetic plastic surgery procedure in 2010, followed by liposuction, eyelid surgery, abdominoplasty, and breast reduction. Dr. Steven Turkeltaub says that this is consistent with the breast surgery procedures that he performed for his patients in 2010 as well as the first half of 2011 at his Arizona plastic surgery practice.

Nearly 580,000 breast surgery procedures were performed in 2010. This total represents a 9% increase over the 2009 totals, which were adversely affected by the recession. However, Dr. Turkeltaub says this increase is due to more than the improved financial conditions: “As highlighted by the latest ASAPS study, an ever greater percentage of Americans approve of cosmetic enhancements, which are increasingly considered as mainstream procedures. In addition to wanting to look better—and feel better about themselves—as they have in the past, for some patients seeking employment or trying to hold on to their jobs, they believe a more youthful, attractive, and even alluring appearance may just provide them with a noticeable and competitive advantage.”

Regardless of the slight decrease in 2009, a 14-year comparison of breast augmentation reveals the number of procedures performed more than tripled from 101,176 in 1997, to 318,123 in 2010. Dr. Turkeltaub says the constant drive for innovation in the field of aesthetic enhancement is likely the cause of such a increase. “During this same period, there have been technological advancements as well as refinements in technique that should provide patients with more predictable and durable results along with even greater safety and comfort.”

Dr. Steven Turkeltaub earned his medical degree from Boston University School of Medicine. He completed his general and plastic surgery residencies at the University of Massachusetts Medical Center, where he also held an appointment as a Clinical Instructor. Dr. Turkeltaub has authored several papers and chapters for plastic surgery textbooks, as well as several magazines and newspapers. He is a member of the American Society of Plastic Surgeons, the Arizona Society of Plastic and Reconstructive Surgeons, and the Arizona Medical Society.