Home|Blog | The History of the Modern Bra

The History of the Modern Bra

Have you ever stopped and thought about how progressive women’s fashion has become in the past century?

The changes are not surprising considering how women have been steadily fighting for their rights and to be equal to men: equal in politics, equal in business, and yes, equal in clothing choices.

Not even a hundred years ago women were restricted to floor-length dresses and bound by corsets and petticoats but as they fought for power socially, they achieved more power over their bodies, allowing them to own their sexuality and finally giving them the right to love their bodies.

Nothing symbolizes this struggle more than the history behind the modern bra.

Up and into the early 1900s, women were confined to metal-boned corsets. In 1914, New York socialite Mary Phelps Jacob patented the design for the modern bra. She first came up with her design by sewing two handkerchiefs together with a pink ribbon when her corset laid in an unsightly fashion under the party dress she wore. The backless design she created allowed for more comfortable and agile movement, including when dancing. She eventually sold her patent to Warner Brothers Corset Company, who popularized the style.

When the United States entered into World War I, many women had to take over jobs in factories that had been vacated by the men who had gone off to battle. Corsets proved to be impractical, uncomfortable and awkward for women in the workforce. Furthermore, there was also a call to stop wearing corsets in order to help preserve metal supplies for the war effort.

A large number of women complied, saving 28,000 tons of metal. Thus started the drift away from restrictive underwear.

The Roaring ‘20s and Its Backlash 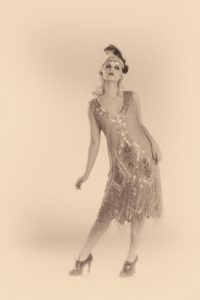 The early 1920s brought with it the age of the flapper girl. Their focus on an androgynous appearance brought about the popularity of breast compression. Many women wore bandeau bras that bound their breasts so they could achieve flatter, more masculine-appearing chests.

Opposing this artificial, uncomfortable compressed breast look was Maidenform, a new company established in the ‘20s by a New Jersey seamstress, her husband and the shop owner. It strove to create a more anatomically complementary bra that included discernable cups and that truly provided support. With this design also came our modern cup sizing system (A, B, C, D, and DD).

In 1947, Frederick Mellinger, the founder of Frederick’s of Hollywood, introduced the first padded bra. The cone-shaped bra also became increasing popular. Sentiments expressed during World War II had women feeling like they needed to be more “protected,” and the cone-shaped or torpedo-style bra offered that “protection.”

Even though there were other styles available, many women continued to wear corsets and girdles well into the ‘60s. Still, during this period of time it was extremely uncommon for women to seek body contouring through working out in a gym, with many still relying on garments to help achieve their desired body shapes.

By 1968, the first Wonderbra was launched with great success. 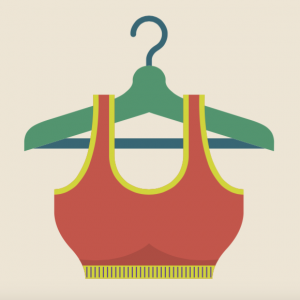 The same year that the Wonderbra was introduced into the market, the famous Miss America demonstrations took place. A group of feminists protested the Miss America pageant on the grounds of its sexist ideology. Many women threw away their bras in trash bins to symbolize their freedom to dress how they wished. This was the start of women publicly claiming their female sexuality. Women demonstrated their right to choose whether to wear a bra or not (i.e., to dress like ‘women’ or not).

Many major changes in the bra industry occurred beginning in the ‘80s. Bras were being designed to be more exotic and sexy and so were the models advertising them. By the ‘90s, women were dressing down, wearing less and revealing more. Madonna worn her iconic cone bra on her “Blonde Ambition” tour in 1990.

By the new millennium, the industry saw the advent of silicone bra inserts, which revolutionized enhancement options, particularly for women who were not well endowed. Victoria’s Secret’s Angels changed the fashion industry and popularized the commercial sale of lingerie.

Technological advances continue even today, allowing for improvements in bra support and aesthetics that lead to a further boost in the confidence of millions of women.

The history of the bra isn’t simply a history of fashion. It is the evolution of female empowerment and the struggle for women to claim their sexuality. The benefit of that is being able to choose to have a body that makes you feel sexy and attractive.

Reclaim your sexuality and confidence through breast augmentation surgery. Schedule your consultation with Dr. Turkeltaub today to discuss how breast augmentation can change your life. Call us at (480) 451-3000 or fill out our online contact form here.