A periareolar mastopexy, which is also called a purse string, doughnut (donut) or circumareolar mastopexy, is a technique used for breast lifts that employs just one incision which is situated around the areola. It is inherently attractive to many women who are seeking to rejuvenate and lift their breasts with few tell-tale signs. I feel strongly that a periareolar mastopexy is a rarely indicated approach except for very rare situations involving very minor drooping. The tradeoffs are too high a price to pay in comparison to the far superior results that can be obtained with more and longer incisions.

Unfortunately, many people including physicians have a tendency to equate shorter scars with better, more advanced or state of the art results as well as a more talented surgeon. In situations where the results are exactly the same irrelevant of incision length, such as in gall bladder surgery, this belief can be well founded. However, this isn’t valid in breast lift surgery where I have always believed that if more or longer incisions would allow for an unequivocally superior contour and appearance, then the trade off would be worth it.

The goal of a mastopexy is to recreate a natural, conical shaped breast that has the areola situated at the most projecting part. An inverted-T (or anchor shaped) incision allows for the most precise reshaping of the breast and skin envelope in a three dimensional fashion. It also facilitates the accurate repositioning of the nipple-areola complex on the ideally recontoured and rejuvenated breast.

The limited incision periareolar mastopexy technique eliminates the vertical scar extending down from the areola as well as the horizontal scar in the breast fold. Therefore, essentially a two dimensional approach is expected to solve a three dimensional problem involving lifting and reshaping the breasts, resizing and repositioning the areolas and attempting to obtain improved symmetry. This all has to be performed with the asymmetric removal of a doughnut of excess skin from around the areola and then and purse stringing the larger circle to the smaller circle (areola) which tightens the skin.

This technique creates maximum tension around the areola which then translates into significant untoward and predictable consequences including:
1.)    flattening of the shape of the breast yielding more of a pancake contour rather than a conical one
2.)    a stretched and often flattened areola causing that can be irregular in shape
3.)    widened and thickened scars around the areola
4.)    the appearance of  skin pleats and lines emanating radially outward from the areola
5.)    limited flexibility in the precise placement of the areola on the breast mound
6.)    difficulty obtaining better symmetry of the breasts particularly when they were significantly different in size and or shape prior to surgery

A quite convincing illustration of these issues can be seen in the photos below. This 36 year old woman had a periareolar mastopexy performed by another plastic surgeon and was very unhappy with the outcome on several accounts. She saw me in consultation in order seek correction of her suboptimal results. 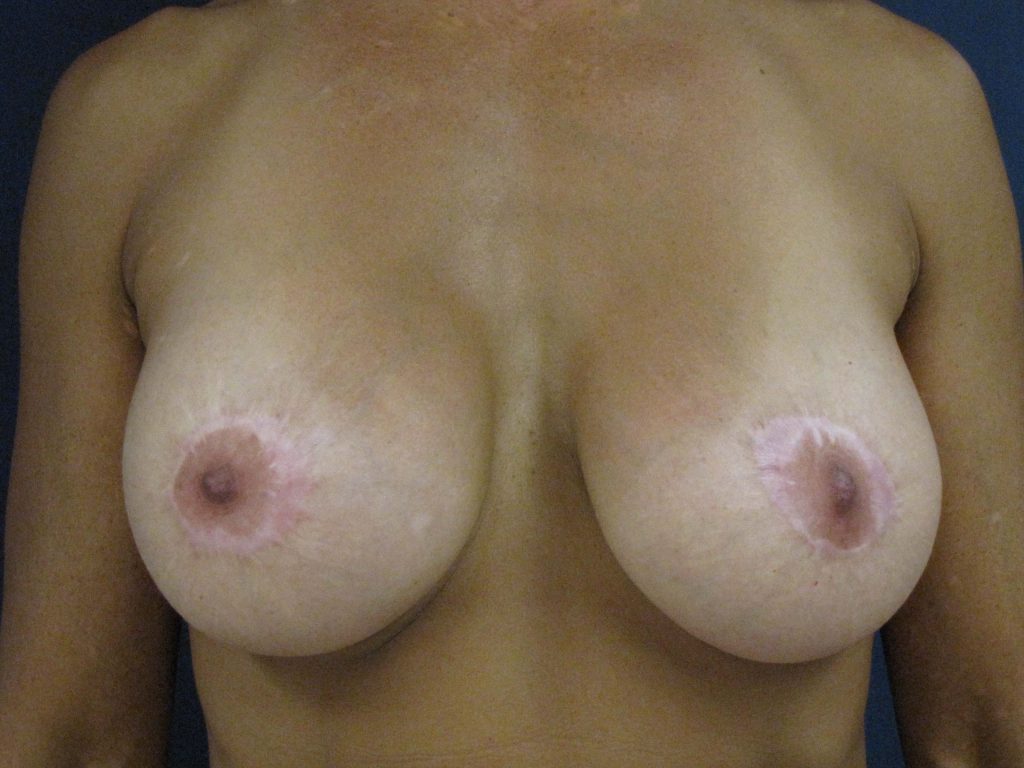 This is the outcome of a periareolar mastopexy that was performed by another plastic surgeon. The scars around the areolas are very noticeable, wide and unacceptable. A pleating effect - lines in the skin radiating outwards from the areola - can also be seen. 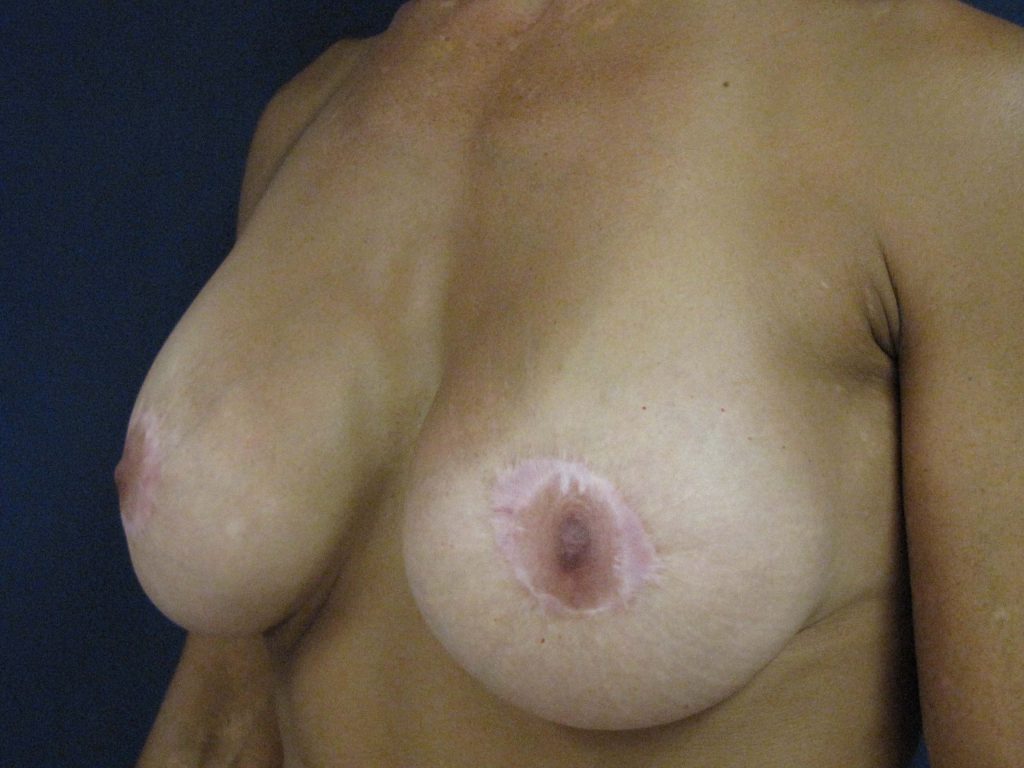 The scars resulting from the donut mastopexy are prominently visible. The flattening of the areolas as a consequence of the purse string technique is well illustrated in the right breast. Instead of the breasts being perky and somewhat conically shaped, they are flattened and underprojecting. 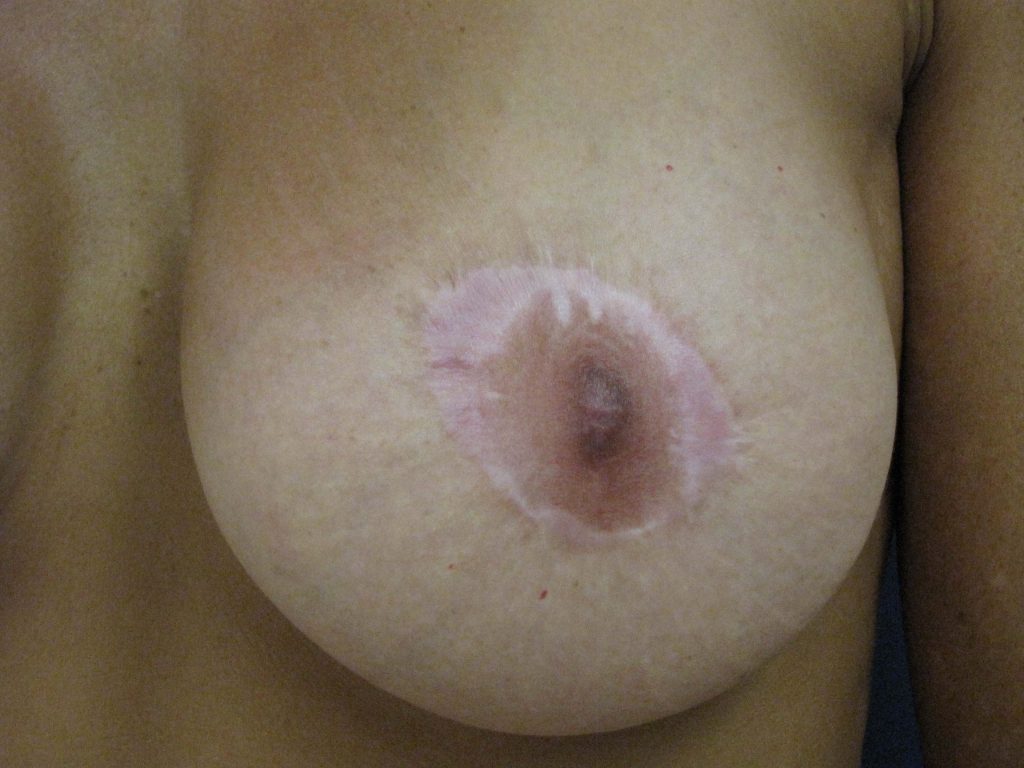 For additional information on breast lift surgery with or without a concomitant breast augmentation or on any other plastic surgery procedure that I perform or to schedule a complimentary consultation, you can contact my office at 480-451-3000.