Home|Blog | Why You Shouldn’t Get a Benelli Lift

Why You Shouldn’t Get a Benelli Lift 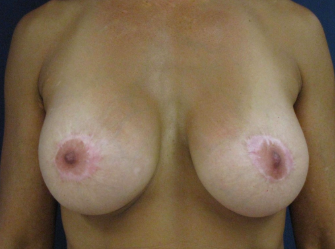 Results from a Benelli lift. (This patient was not operated on by me.)

For women who have chosen to undergo a breast lift (also known as a mastopexy), there are several incision options available. While all of these choices are designed to elevate and tighten sagging breasts, they each go about the process in specific ways and, therefore, provide different final outcomes.

Some results, however, are worse than others.

One of these approaches involves accomplishing the lift by employing an incision just around the areola, known as a Benelli mastopexy (also referred to as a donut or periareolar mastopexy). With this method, a “donut” of skin is removed from around the areola, tightening the breast skin in general and thereby elevating them.

Often, women who seek out a Benelli breast lift do so because it is presented or advertised as a minimal scarring technique. While it’s difficult to argue with the logic that fewer incisions should result in less overall scarring, this type of lift is one of the few situations where this is not necessarily or usually true. Though there won’t be vertical scars extending down the lower portion of the breast or horizontal ones along the breast crease as in other approaches, the scar around the areola will often be thicker and more noticeable than those eventuating from the other incision options. In addition, a Benelli lift very often leads to stretched out, irregularly shaped areolas with skin pleats and lines radiating outward from their borders.

While the Benelli lift can remove excess skin that is associated with breast sagging (ptosis), it essentially creates a two-dimensional correction where a three-dimensional one is absolutely needed and desired. Consequently, the result is a flat aesthetic appearance rather than a rounded, more projecting and natural configuration upon which the areola should be. Your results will be inferior to other incision options. Additionally, symmetry between the breasts is more difficult to obtain with this type of lift which even further lowers overall satisfaction.

What Approach Does Dr. Turkeltaub Recommend?

Only in the very rarest of situations does Dr. Turkeltaub feel that a Benelli mastopexy would be an appropriate option. It is his strong belief that you should consider the technique that will provide you with the shapeliest and most accurate breast contouring results independent of the total length of the scars needed to accomplish that. These options are: